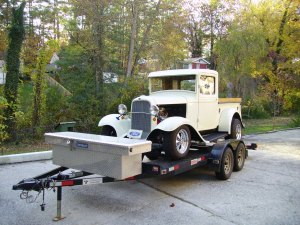 Ok, with the help of JP and Melissa (I used their truck/car trailer) I was able to take the old pickup that Dad once owned, the 800 miles to see my him (WT Haynie).  He expected my visit, but not the surprise that sat on my trailer.

My first plan was to drive it up to his house, but as I neared figured that I would simply back the trailer with the truck just outside of his sliding glass door where he begins each day viewing the world and contemplating direction.  This was the better plan.

So at 7am (and hoping that he would soon be in his chair) I made it to the house and parked it quietly outside of his door – after 50 years, this truck had unexpectedly returned into his world. 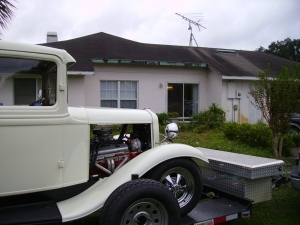 It was kinda neat because as I stepped out of the tow vehicle (he was at the table) I could heard him hollering to someone else in the house to  “come-look!, come-look at this!!!”  I figured he either had an eyebrow hair that needed pulled or had indeed noticed his old truck – it was a good sound; and one of surprise. 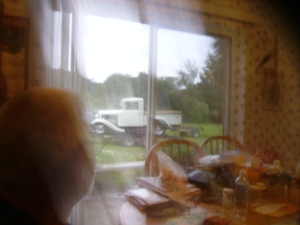 As I looked in from outside I didn’t see a grumpy man of 82 taking his morning punch at the changing world outside, but I saw smiles and through out the day heard lots of seldom used chuckle’s – as a matter of fact it was that way the entire visit.

I’m not sure how it would be for any of us to see the same vehicle that we had owned and cared for FIFTY YEARS earlier, but I can tell you that as a mechanical-minded person; it meant alot to my father.

We took several rides that day,  even drove it over to several of his local friends places of business (they had Hot-Rod projects too) and swapping stories of years and cars past.  Dad would always begin by saying “I told you I had one,” and how he had traded that riding mower (which had thrown him off) for it in 1959. 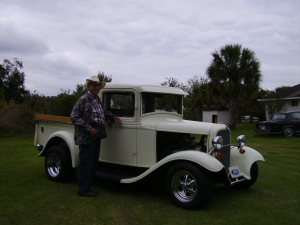 Dad had stories about it all day…….(how he once used it to buy/sell Cadillac engines, how he ran it for two weeks without water (he would just stop and visit with a friend as it cooled – then go on, returning the same way) how he mixed concrete in the back of it after Hurricane Donna) and so on ……. even made me go get the neighbor immediately next door (rebuilding a later model pickup) so that he could tell his stories once again.

It was an active day for Dad right up until dark, at which time he was worn out (for good reason) and in bed by eight – all was very good. 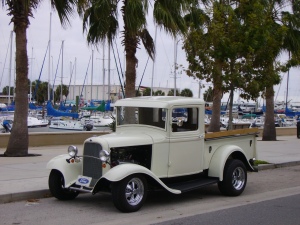 Wasn’t a bad day for me either – plus I even found time (during his noon siesta) to take a ride to the nearby marina and walk the docks.

One more day in “Boca-Boca” (all the Seinfield facts are true) and I’ll head home……..

(a little more on the visit) 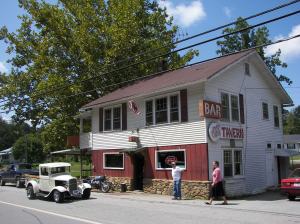 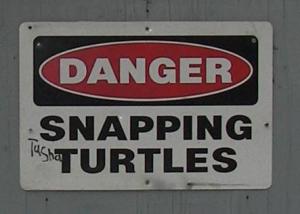