Water clarity- 10 (this river is my ‘benchmark’ for all others)

Natural Quality – 9 (only the traffic noise took away here)

Wow, how could I have guessed that a day paddlin would be so simple and enjoyable?  As a kid our family frequented a number of these Florida springs several times a year (Rock Springs), I still get cold thinking about that water.

I don’t recall if we shivered because of the temperature or with the anticipation an alligator strike (which never came), I suppose we just floated right on past them.  This is the first time that I have returned in many years – specifically for the same spring water, this time in a kayak.

I headed to the boat ramp at Ray Wayside to meet-up with my cousin (a plan), Jo-Anne was one of those that swam along so many years ago.  Its my nature to run ‘early’ for about everything – no different on this date, needless to say I was at the ramp at 630am waiting.  With me traveling, our communication had been a little shady, so I really wasn’t sure if Jo would make it – but I sure hoped so.

I waited until about nine and knowing her spirit and gusto as a paddler, that she wouldn’t have any problem catching up with me – I went ahead (might have waited a little longer but some guy walked up and started talking, wouldn’t shut-up).  Another part of my nature, I appreciate ‘short-stories, not long ones.

Wanting to enjoy the ‘peace’ of it all – I paddled on.

So I left the ramp and paddled up the Silver and against the current, really not bad just a matter of keeping to the inside of the curves and outside of the main current.  It felt like I might have paddled for hours – and I don’t mean that in a bad way – the time along the way was thoroughly enjoyed within the natural peace that surrounded me – no fishing, no big boats, no noise…..  The turtles and birds did not always leap off of the stumps as I neared – and I could usually get within two feet – on the return float it was even closer. 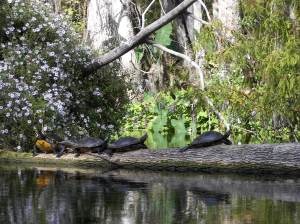 With the crystal clear water the turtles in the water appeared to be suspended between me and the river-bed – large dark fish idled along the bottom too and ‘lazed ‘ in the clear sandy areas.  There were gar passing in between also – much like Ichetucknee Springs.  The cormorants would dive and swim after a fish, all easily witnessed from the kayak above.  It was possible to see thirty feet down, the nooks and crevices added to the character of the bottom while the current moved the occasional seaweed like a slowly waving flag on a warm summer day..

The natural peace of it all was everywhere – the shorelines were filled with cypress trees and their knotty protrusions, palmetto bushes, tall oak trees, and dead lifeless ones too.  I passed complete trees suspended under the water, it all had that three dimensional feel to it (like Tahoe) – a different view in volume that’s for sure.

The time paddling upriver was much less noticed that the surroundings and before I knew it I was hearing voices.  The Captains of the glass-bottom boats were describing the scenery to the tourists, so I floated along and listened….

At the mouth of the springs was the tourist attraction corral (Silver Springs).  When arriving as a paddler (as I did) it is necessary to stay in the water – in your vessel.  To do otherwise within the park you could be charged with trespass – but I understood this and simply put my ‘feet-up,’ opened my Subway, and began to ‘go with the flow’…… soaking it all in (the property now belongs to the state and is no longer private).

For the next three hours I coasted in a very peaceful manner, only seeing two other paddlers and a troupe of ‘bantering’ monkeys along the way. 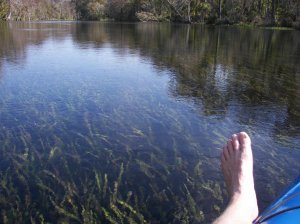 Now that I had a little calibration and located the single ‘beverage’ (in my pack to keep my Sandwich cold) – I thought “What the heck?”

Again, it was all really nice and I was plenty comfortable – at times floating along with my feet in the water……  With the bright sun and clear water, the shadow of my vessel (and feet hanging out) moving along the creeks sandy bottom was like soaring in an airplane.  As I basked within the wonder of it all, I recalled the PBS show about killer sharks coming up on their prey – and then I thought about the alligators.

Now the Native Florida Black Alligator is not an aggressive beast, we can live in harmony and do – I saw three on this date – still, I did put my feet back in the kayak.

Actually, the ‘banter’ from the troupe of wild monkeys received more attention than the ‘gator,’  – there really was a natural cycle going on here and it was great to be in position to just ‘listen in’ to it all……

Reluctantly I made the turn back to the boat ramp around 4 pm, it was an incredibly nice float….

and worth every single moment….,

Holler if you want company..I’d go again in a minute….. (tomhaynie@yahoo)