‘Snowbird’ (snou-burd); An old person who migrates to Florida for the cold winter months – (being a native Floridian; this is the kindest definition).

“Back in the day”….I drove a semi hauling produce to the Northeast and Midwest – spent most of the seventies pretty much living in the truck; it was easy.  I had my bed, my picture window (windshield), and stuff going on all around me. I had all that I needed.  As the crops moved northward – so did I. Florida Tomatoes; South Georgia watermelons;  Carolina cucumbers; Ohio radishes; Wisconsin cucumbers – then back again the following year..  Following, loading, hauling, and returning.

Fargo, Ga – after dropping out of the Carolina mountains, we stopped in a pretty much abandoned park along highway 441, at the top of the Suwannee river.  I love to hear the trains too, they are a part of my family and seemingly a part of everywhere I want to sleep – trains and/or owls…..

As a boy I was privy to a ‘railroad conversation; a story between two Uncles on how the rails could ‘sing’ long before a train would actually arrive.  Over the years and many railroads later; I had never experienced it. In Fargo this night, sleeping practically beside the railroad tracks and through the long silence stretches of that southern Georgia night, I slept.  Better yet, I learned exactly what my Uncles were talking about..  zzzzz….

Many miles away the faded horn of a train rippled through the silence of the night – it was nearing; closer and closer..  The nearby rails hummed then hit a higher octave as the train got really near – then they whined, almost to a ring as the train thundered pass.  A railroad man could easily describe the vibrations as ‘singing.’  The rails sang before the train arrived and faded as the train distanced into the night, anyway – I’ve heard the rails ‘sing.’

There were at least six trains that night, two were freight – the rest because of their speed I felt were passenger; a busy North to South night – all pretty neat in its own subconscious way.

Such is the mental compost of this nomadic ‘snowbird.’

I laugh too when I tell folks that since having an RV I can now make the same 12-hour trip that I once made in a car – in two or three days…. “Life at 60. 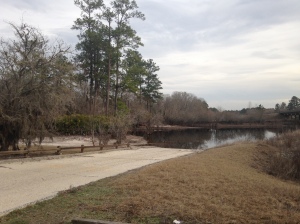 Top of the Suwannee to you…. 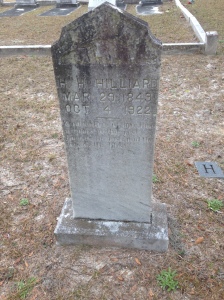 A ‘why-not’ stop at the local cemetery in Newberry, Fl – to visit a few of those from my Mom’s past – the Hilliard clan, mostly railroad folks.  I guess it was a migration of folks that in some way we can all associate with; the one we know.  In the 1800’s her folks were part of settling Waycross, Ga and Hilliard, Fla laying track southward and migrating even further into to the untamed territory of Florida..

Those of the railroad within the Hilliard family were track-laying crew ‘Captains,’ conductors and firemen of the Atlantic Coast Line railroad – it was a family thing of that era. 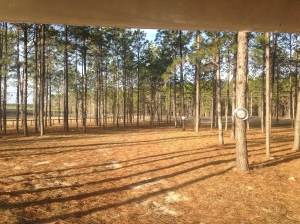 but onward down the road to Hub-cap hill..

A stop in the wide open mid-Florida pines to visit a schoolmate of years past and walk his place.  FMHS70, Danny’s doing well and was mighty proud of his fresh new shop.

I would be too – Awesome, I know what its like to not have a garage – I didn’t have one for thirty years, now I have a couple.  It does a man good to go piddle in his own garage…. a fine place to be..

Dan’s done well; his old-friend Jim had stopped by too – a three down chopper survivor and POW of the Vietnam era; great guy and Sa-lute!  Thank’s Jim, job well done..  We had a great burger and a beer nearby at Willards – before moving on down the road…  good stuff, thanks Dan, and Jim

Dunnellon, Fl – and a coffee-stop with Cousin Butch and Ollie – I kidded Butch that I had seen enough Hilliard tombstones and wanted to see a live ‘one,’ visits with cousins are always special – and Butch, (Uncles Lester’s son) was always a character.

Moving south towards our goal of Arcadia, Pioneer Park in Zolfo Springs came as a surprise. Running early, I had hoped to just pull in and ‘waste a day’ and night near the boat ramp of the Peace river – simply looking for some of that ‘ramp’ entertainment.

The park had turned more commercial than on my last visit.. There was a large flock of snowbirds (northern RV’ers) on the hill out in the open and well, that just just doesn’t fit my migration pattern yet.  As I pulled away to leave the park I found a ranger and learned that I could park anywhere along the water that I wanted.

Not needing hookups for a night we found a neat place by the water and ‘spread out.’…

It was a relaxing evening by the water; really close bird and gator watching from a chair with a beverage… and I never thought that Zolfo Springs had anything to offer.

Super bowl Sunday, Beef O Brady’s Arcadia, Fl.  Because of the anthem protests I hadn’t watched the NFL all 2017 season, so I was ready to watch A game.  Had a fine time too – and for me, because Kim didn’t feel up to watching it (stayed in the RV) – everything was ‘half-price!’

It was fun falling off my bar-stool with the chicken-wing and beer crowd of Arcadia (I sprang to my feet“dilly-dilly!”)  Can’t lean too far back or forward on one of those things…. but I fit in…. didn’t really matter which way the game went and on this night – The Philadelphia Eagles defeated the New England Patriots…

A week tucked into one little corner of the world; just close enough to my hometown of Ft Myers to feel the same weather – far enough away not to hear the sounds of my memories drowned in today’s reality (but a train’s ok, go figure). 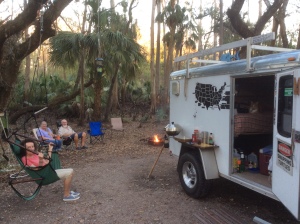 As Al, Ava, Kim and I sat in our quiet corner of the park another couple began backing their camper into the site beside us – “Why?” do they have to stop here?, “Why can’t they go to the other quiet area of the park?” leave us in peace… these were all quiet little tones creeping through each of our minds and thoughts – a natural inclination I hope.

We maintained ‘polite’ and watched the ‘circus’ of another parking (much like the activity at the boat-ramp).  In reality there is little choice to who parks near or beside you in a campground.. it’s just a part of it.

Well doggone if it didn’t turn out to be a couple more friends from “back in the day” – we hadn’t seen Bill and Betty in 37 years!

Kim took the picture which by chance neared an older image of 1981….

So it was “all good” and we spent the day watching the local Owl while laughing about all the snarly tidbits that we had shared as these ‘strangers’ pulled in beside us.  Fun, plus it sure was good to catch up on some lost years while visiting with folks that make up the fabric of many memories from years past.  Maybe it’s a test of sorts…

On the second day Bill and Betty moved on to Disney-world with their Grand-kids. Then with a little coffee Ava  got into the breakfast groove.  We had several mornings to refine a ‘camp-mix’ breakfast thing; I think we came up with something….

While Ava ran some errands Kim and Otis watched the shade move. 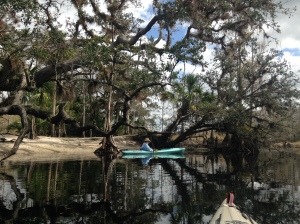 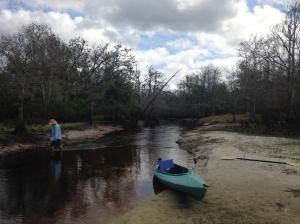 and Al and I went up the creek….

with a paddle.  The area was hit hard during the 2017 Hurricane IRMA, but the campground has returned and seems to be in great working order.  The creek itself is unchanged and remains a fine place for a short canoe or kayak trip. This year the water was a little low, the water was condensed and there were some healthy gators lining its shores… 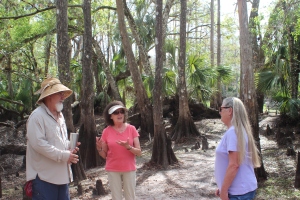 When I was young the lack of gators became a concern – so hunting was very limited if any.  With that protection the gators have made a comeback and in some places you might try some real ‘gator tail,’ if properly cooked its some good eating….

another fine week had passed. Great to visit with Al and Ava and other friends from the past – great to be able to share such amicable visits with long time friends

Somewhere in the morning I trimmed my whiskers; then ‘Locke’ and Patsy came through, really special effort – it all made our trip almost complete. There’s a few more yet I’d like to see yet….

It brings to mind a story that a neighbor told me of my late Dad.  On a trip back to his hometown in Georgia, Dad went to visit a boyhood friend that he hadn’t seen in many, many, years – unannounced. He found his friend, I’m sure Dad called him by name and could imagine them coming face to face.  Two men in their eighties looked long and hard into each other faces when my Dad’s friend finally asked “should I know you?” Dad mentioned who he was; and through those same eyes their friendship from long past returned – once boys, now old men – and they cried. (true story)

Now I don’t look to hug and cry, but I know probably like my father had learned – that we only have a few cherished opportunities to visit people and places of our past…do it. (a.k.a. ‘little circles’) 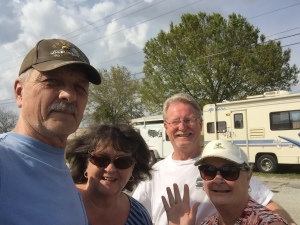 a few hours with Kim’s sister Barb – and Duane 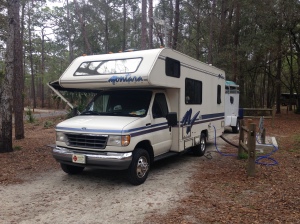 Three days and two nights at Wekiwa Springs, near Apopka and an old family favorite Kelly Park.  This Park being so close to civilization has scared me away, but it was the path of our next destination and we had the time.

It was also a good opportunity to size-up things for a return trip to paddle that stretch of rock springs run.

This is something that my father left on his passing, my sisters and I share interest in it and we needed to make a yearly visit to clear some paths. 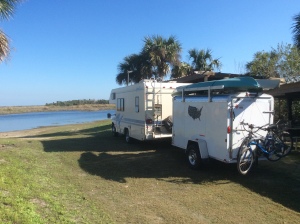 It actually has some perks; its a great place to stop and put your ‘feet-up’ while enjoying some of the finest inland marsh along Lake Harney and the St Johns river.  Native wildlife is abundant, it is eagle habitat, and there are many other critters moving about – it’s native, like real Floridians remember!

Our critter Otis came with us, he did awesome. It was questionable whether he would make the trip – as he did two years ago.  I told Kim before we left that if he ‘took off,’ I was only going to go look for him a limited time; Otis must’ve overheard us because he did excellent and stayed close… 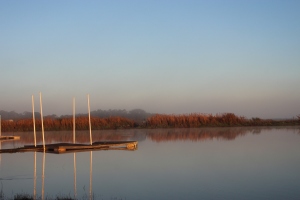 We almost left here a day early, but after a trip down to the Jolly Gator bar and restaurant we decided to stay another night – best decision yet!

A change of beverage, a peaceful scene 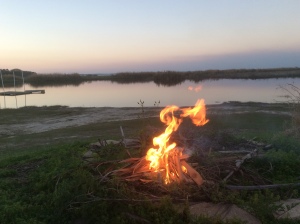 It was the best way to end this fledgling ‘snowbird’ lap of Florida.

Just another part of the journey; Life at 60 (mph)